As part of an effort to increase access to mental health services in Africa, McLean Hospital is partnering with the German-based non-governmental organization (NGO) On The Move e.V.

The groups are working together to increase awareness of brain health and to fight the stigma surrounding mental health in Ghana and Kenya. An expansion of McLean’s Deconstructing Stigma campaign, the collaboration focuses on volunteer programs, fundraising campaigns for medical facilities and schools, and education centered on brain education and mental health awareness.

Why Is McLean Doing Work in Africa?

By working with the NGO On The Move e.V., McLean is delivering on its mission to expand access to high-quality mental health services worldwide. The partnership helps to enhance overall knowledge of brain health and encourage compassion and understanding for individuals living with mental health conditions.

About On The Move e.V.

On The Move e.V. coordinates volunteer programs, fundraising campaigns for medical facilities and schools, and brain awareness activities in African countries, Germany, and the US. The organization’s co-founder Rick Wolthusen, MD, explains that the group was initially created “to facilitate a cultural exchange between medical professionals in Germany and Ghana.” Over time, On The Move e.V. expanded to “build mental health infrastructure, provide holistic mental health care, and work to decrease the stigma associated with psychiatric diseases.”

The NGO offers training in vocational and emotional skills to socially reintegrate mental health patients back into society. In addition, On The Move e.V. provides brain awareness education to increase the public’s understanding of brain function and mental illness, and to fight the stigma surrounding mental health.

In 2018, On The Move e.V. created a Center for Mental Health in Ghana called Home of Brains. The first institution of its kind in the country, the center offers mental illness prevention services, therapy, and education. All activities build on research. Home of Brains also collaborates with local hospitals on referrals and rehabilitation efforts. On The Move e.V. provides similar services in Kenya. The NGO collaborates with local partners from different sectors, including the newly founded mental health patient advisory board and religious leaders from different institutions, who act as gatekeepers for community mental health needs.

Now expanding its efforts in Africa, On The Move e.V. has started working with a mental health NGO in Rwanda and is reaching out, in collaboration with a partner NGO from Montréal, to organizations in Senegal, Cameroon, and other French-speaking countries in Africa to seek collaborative opportunities.

To increase his group’s education and anti-stigma efforts, Wolthusen reached out to McLean Hospital in 2017. “I got interested in McLean after seeing the Deconstructing Stigma display at Logan airport,” he said. Much like the Deconstructing Stigma campaign, On The Move e.V. has collected stories from mental health patients and created public displays and exhibitions in Africa and Germany.

McLean is working with Wolthusen, who is pursuing a master’s degree in public policy at Harvard’s Kennedy School, on new anti-stigma outreach campaigns and they are planning a Deconstructing Stigma-style display for Harvard University later in 2019. On World Mental Health Day 2018, On the Move e.V. and McLean partnered for the premiere of the documentary “Obuongo Edhano – Embracing Mental Health in Western Kenya,” a film, which was produced by Millstone Media Production, showcasing the mental health work being done by the NGO in Kenya.

Facts About Mental Health in Africa

These Deconstructing Stigma participants are sharing their stories about their experiences with mental health in order to change attitudes about mental illness.

That is my worry

A. was diagnosed with depression about three years ago.

“Previously, I used to farm, grow cassava, and prepare gari, but because of the condition I am not able to do those things anymore.”

Even though some community members understand what A. is going through, a close family member gives her a hard time. “It is one of my relatives who now insults and quarrels with me sometimes that I should leave her house.”

“I do feel pity for myself because my children were not old before their father died. I also left them alone in the village while I am staying here because of my condition. I do think about this a lot and feel very sad for myself.” In life we have two options: we become victims or we choose to be victors

About two years ago, C. was diagnosed with depression. “At night I couldn’t sleep. Caught up in thoughts. This condition did not just affect my nightly routines but also interfered with my day-to-day activities. I had to stop working. No income. More worries. And these worries got me thinking so much that it made my condition even become worse.”

All C. is asking for is to be “free again” and to “escape this nightmare!” She once asked a friend for help. “She listened to what I said but never offered me her support. I was left alone. Her behavior towards me changed and she even told me to go away, calling me ‘mad.’ I felt I was left all by myself.”

But C. is strong and fights. “I started working again, I take my medication, and I hope that one day I will no longer be called nor remembered as the mad girl that is not even regarded as a human being, but the one that fought herself back to life.” If someone is in need, the person must be advised and not isolated

In 2007, R. came back from work one day crying and shouting. She says that she saw something that was rising. “I could not tell my friends. And yet, when we discussed issues relating to the environment and works that money involve, they did not tell me.”

According to her mother, “R. was in a relationship by that time. The man used to lock her inside the room and leave the house. One day he came to tell me that ‘this is not the type of woman I want to marry.’ When I wanted to take my daughter, he refused, and in the process he pushed me into fire.”

R. only has one wish: “I want that all my former friends understand and come back to me.” My story could be anyone’s

Before E. was diagnosed with schizophrenia, he was a good student and very active in the community. He always wanted to help those in need. But suddenly, “I began to see and hear things that couldn’t be grasped by the people around me but yet felt so real to me. I remember that I came home from school the other day, and all I could think about were these words running through my mind and all I knew is that I had a revelation.”

Even though E. did not know what his condition meant at the beginning, he was receiving medical treatment and participated at On The Move e.V.’s rehabilitation program. He is now medically stable and found a new job.

“I believe that finding yourself with any brain condition shouldn’t be the reason you’re being isolated but rather [you should] be embraced by society.” I want to make a change

After his dad passed away in 2009, Tavi first exhibited symptoms and was eventually diagnosed with a brain disease called bipolar disorder.

Tavi experienced that some of his friends were laughing at him because of his sickness. “Educating myself helped me realize that there were other people diagnosed with the same disease. That helped me fully accept myself!”

Not only reading and medications improved Tavi’s condition. He also says that “nurses were of great help”. Because of his positive experiences, he started nursing training in 2014. People should regard everyone as a human being

M.’s battle started back in 2005 when his father died. “I thought that people in a car held a kind of metal which made me afraid. I thought they wanted to kill me. I also heard voices. I tried hard to understand, but my brain will not allow me to come to terms with that.”

Soon after M. had experienced the first symptoms, some challenges began. “Though I was very brilliant in school, I realized that learning became difficult.” Moreover, M. also soon realized that people were calling him insulting names such as “madman.”

“Some people also refused to talk to me. It makes me feel rejected and deserted because of my condition.” 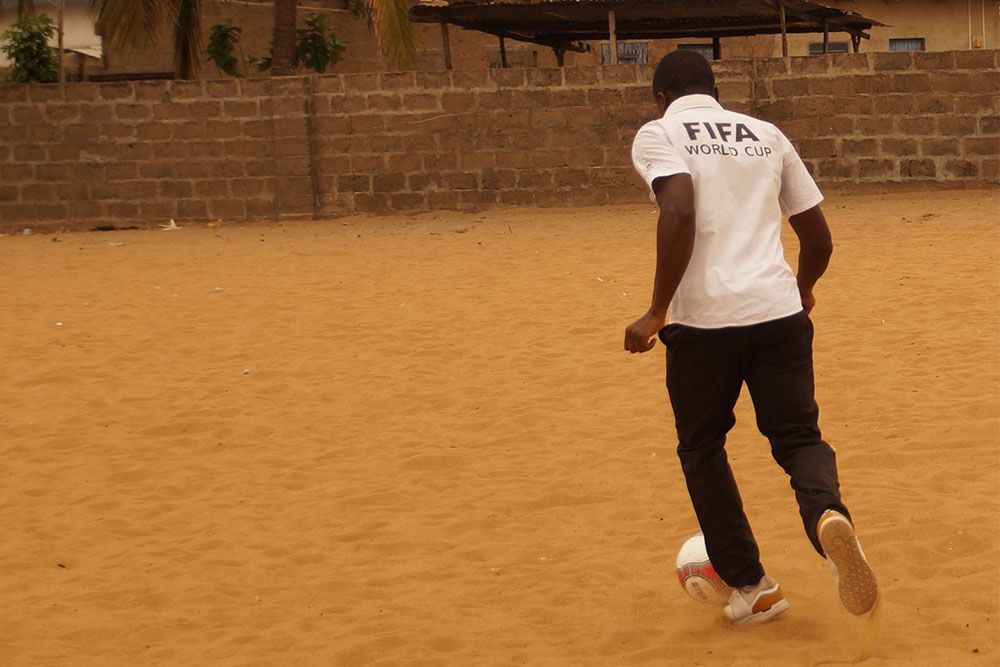 All I want is an independent life

M.’s feelings of not being herself started about two years ago. “This has interrupted my daily activities. I hardly slept at night, eating became a big task for me, and interaction with people was like hell. I also felt very hostile most of the time.”

M. felt guilty. She also asked herself: “Why should I have a boyfriend? Do I even deserve it?” But it was not only the disease that she was fighting against: “Words such as “mad girl” were like a sharp knife cutting through my heart and worsen my worries and thinking.”

Nowadays, she reflects about her condition differently: “The road of mental illness seems to be an ugly and fearful one. Thanks to God and some of my family members who helped me through, I am better now.” I want people to learn from my story

C. has struggled with epileptic attacks since 1985. “From the onset, I did not notice the attacks myself. It is only after the attack that I used to see signs of injuries before I realized that something had happened to me.”

The epileptic attacks not only caused physical damage to C. “The condition affected my education, and I was not able to do any work on my own. Also, my family does not regard me as anybody.” Before C. received medical treatment and was included in On The Move e.V.’s rehabilitation program, he was neglected and physically abused because of his condition.

“If there is a family and they have someone like this, they should not abandon the person. The best thing to do is that they should bring the person to the hospital early for the condition to be detected and get him on medication. But when they hide the person, they will first destroy his future, and he will not be able to enjoy social amenities. There is medicine for all those diseases.” Yet my story was different

“Turning 20 years, a young girl has the greatest expectations of life. Dreams and aspirations—the beginning of a bright future awaiting her. It was when I turned 20 when things began to change for me. Nothing was as I expected it to be.”

P. was diagnosed with epilepsy a few years ago. She describes the condition as a disease that makes carriers lonely in society. “People were caused to think that I was cursed and even obsessed. I’ve been treated as an outcast since then.”

Not only the physical symptoms made her suffer. “‘See how she is behaving like a mad person,’ people yelled at me. They also don’t regard me as a valuable person anymore. I hear them laughing at me. And even my own family members are looking down on me.”

Sometimes people also forced her to eat while she was unconscious, which can be life-threatening. P. is not asking for much: “All I want is to be just like them. I am still hoping for changes to come my way.”